An impromptu dinner with wild asparagus 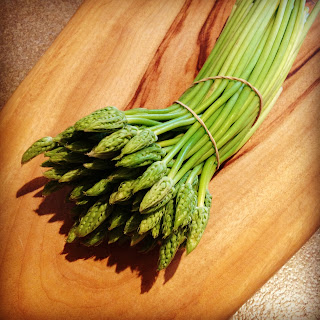 Do you ever find yourself presented with an ingredient curve-ball? I had a moment like that this week when Mr B brought home a bunch of wild asparagus and tasked me to prepare dinner. The defrosted chicken thighs that I was going to steam and drizzle with a spicy Asian dressing were going to have to wait. I wasn't quite convinced that chilli chicken with a side of wild asparagus were happy plate partners.

Wild asparagus isn't really something you come across in UK food markets, although it's more common on the Continent. When I lived in Brussels (thankfully briefly), wild asparagus would crop up in the early part of Spring. Mr B once cooked a gloriously memorable dish with the thin asparagus spears, fresh morels, bacon and new potatoes with inspiration taken from the Harvey Nichols Fifth Floor cookbook. Actually, the local neighbourhood markets were the best thing about living in Brussels.
But we had not travelled to Belgium or France for the lovely spears, although they had some frequent flyer miles under their belt getting to us (I know it's the English season!).  The pretty bunch of asparagus in front of me were from the Jura via the French deli Le Pascalou on Fulham Road in Chelsea (near the Italian place that is a favourite haunt of She-Who-Must-Not-Be-Named). They get lovely things in there, but boy are they pricey! Check your produce or you'll be paying £8 for a punnet of French strawberries rather than £4 for the English ones. It is Chelsea after all.

Have you ever cooked with wild asparagus? I'm a novice with it to be honest, so was at a loss as to where to start. Since this was an impromptu ingredient, my creative options were also limited by what was in the fridge, which was not an awful lot.  Since wild asparagus is a much more delicate looking chap than the regular asparagus we all know and love, it was clear it would not need much cooking. So apart from a quick cook, I was at a bit of a loss.I had a quick scan through my most obvious cookbooks, but no luck, so I then turned to the internet for help and some interesting possibilities began to emerge. 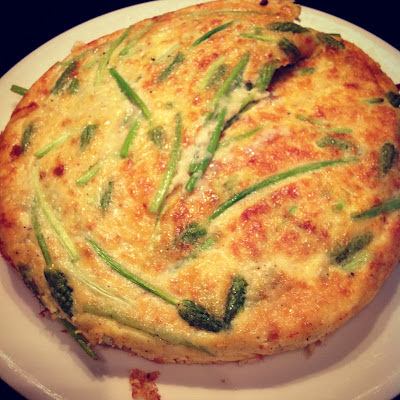 I saw a few references to Sicilian style fried eggs with wild asparagus, but couldn't find a recipe or description of what made these eggs peculiarly Sicilian. My Locatelli cookbook couldn't help me there either. There were also a few risotto recipes which sounded promising, but I didn't have enough ingredients. Then I came across a fritatta. Eggs? Check! Parmesan? Check! Cream? Check!

Apparently Elizabeth David had a wild asparagus fritatta recipe, but I only have an old paperback version of French Provincial Cooking (the revised edition from 1967) which didn't include it, so instead I concocted the following. This should happily feed four with some salad, or even a griddled chicken thigh that was meant to be steamed. Make sure you use a nice deep, oven-proof saucepan for cooking this as it will give you a fritatta with a decent height, otherwise you're just cooking eggs. There's nothing worse than a flat fritatta now is there?

Ingredients
butter - just a knob or two
a glug or two of olive oil
bunch of wild asparagus - of course you could use any type of asparagus
1 garlic clove, sliced
8 eggs
1-2 handfuls of grated parmesan cheese
single cream - about 4 tablespoons should do it
seasoning of salt and pepper 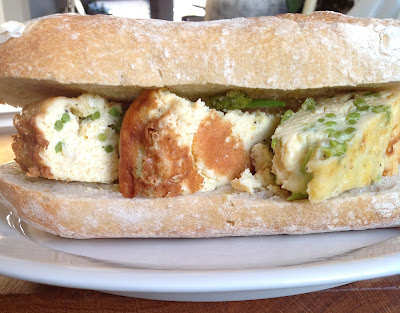 If you should have any leftovers, dinner or lunch the next day could be a really tasty bocadillo. Just get some crusty bread like a baguette and slice it in half. Drizzle some extra virgin oil over the cut halves and lay over slices of your fritatta. Squish it together and you'll be back in San Sebastian. Well, sort of.