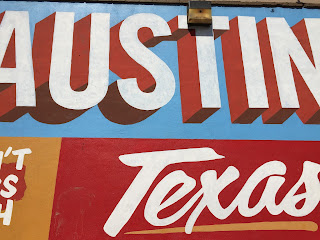 Texas is all big hair, shoulder pads and bitchy pool-side cat fights, right? No? What about oil money, the Bush family and crazy cults? Wide of the mark again? Well, if your perception of the Lone Star State is all (bad) 80s TV references and the less salubrious side of life, then you should head to Austin. You may still see some big hair and probably a cat fight or two (it is a university town after all), but Austin is a great spot to spend a few days particularly if you want to eat well. I enjoyed a long weekend there in mid September when the weather was just a few degrees cooler than Hades, so pack your sunscreen and let’s talk where to eat.

I won something! Seriously, I never win anything. My mum is the lucky one in the family. Every Christmas, she'll win the ham and most likely something else. It's uncanny. Me though, always diddly squat. But the stars must have aligned before Christmas because I won a Seafood Masterclass from the lovely people at Bonnie Gull in Exmouth Market via a Twitter competition. Colour me amazed and excited! I'm a pretty good cook (he says modestly), but seafood is an area that I don't tend to dabble in at home since it can be a bit daunting. No one wants to eat overcooked fish. Knowledge begets confidence though, so being given the chance to learn some tips from the professionals was keenly appreciated. Along with a three course lunch with matched wine plus a cocktail, the afternoon was hugely enjoyable. Granted it was a freebie, but I would definitely shell out the very reasonable £80 for this experience.

Read more »
Posted by Insatiable Eater at 12:33 No comments:

Do you remember the late 80s? In Tokyo? No? It's pretty vague for me too, but if you take my hand and come with me to Kurobuta in Marble Arch, you'll time warp to find Aussie chef Scott Hallsworth recreating the excesses of the rampant consumerism of the bubble economy in the ludicrous ambitious pricing of his Japanese-ish restaurant. You'll find pricing as lofty as those Tokyo apartments (pre crash obvs) and nouvelle-ish portion sizing presented by fresh-from-Sydney staff. The space is pretty relaxed with a mash up of Aussie culture in the music (early 90s indie-punk Ratcat?) and the posters (umm, Warwick Capper, anyone? Bueller?). The food though is actually pretty good and in some cases excellent, but I couldn't really get past the pricing. I mean, a can of Old Jamaica ginger beer that you can pick up at the Kwik-E-Mart for 50p costs £4.50 at Kurobuta. The mark up is astonishing and lingers longer than a gulp of that ginger beer. Clearly, there's a reason why Kurobuta has locations in Chelsea and Marble Arch and not further east: it's aimed directly at the moneyed classes. In Marble Arch I was surrounded by lots of very real fur trim on the winter coats of plucked mothers plus their undisciplined whining children. In Chelsea I'm sure there's more than a fleeting pair of red trousers. If that's your thing, I'm sure you'll have a great time at Kurobuta. For me, it'll take a generous benefactor emulating the feted (or hated) 80s to make me return.

Kyoto travels: the unmissable Miyako Odori followed by ice-cream at Kinana and stunning wagashi at Kagizen

If you're in Kyoto in April, you're very lucky for a couple of reasons. Aside from the abundant, but fleeting, cherry blossoms, April is the only month that the Miyako Odori takes place. Hmm, I sense an ephemeral theme. The Miyako Odoro is a unique theatrical experience with dance, music and song performed by the geiko and maiko of Gion. Its origin dates back to the 1870s and draws local and international tourists by the score. Don't be put off by this though because it's one of the most unique events I've enjoyed, and that's from someone who's typically not really that into traditional song and dance. You'll leave utterly spellbound by this unmissable experience. Just make sure you take advantage of the tea ceremony ticket which, in addition to the brief ceremony itself, gives you access to the theatre's garden. Following the performance, you'll probably feel like a treat, so check out the array of ice cream flavours at Kinana or the beautiful wagashi at Kagizen.

Read more »
Posted by Insatiable Eater at 01:46 No comments:

There are only so many meals that you feel you can do justice to with a blog post and I'm afraid time has usually got the better of me for most of them. I'm not one of those bloggers who is satisfied writing down "I went here and I ate that" and sending it out into the ether of the internet. It's boring to write and boring to read. But there are some experiences I've had that I really want to share, even if it is belatedly and with more brevity than usual (hurrah, I hear you cheer!). Anyway, my mind has recently returned to Japan, and Kyoto in particular, since I've just booked another holiday there. Japan is one of those places that gets under your skin and Kyoto, more than others, is somewhere that never leaves you. I've written of some memorable meals (noodles, tofu, unagi and Fushimi Inari) from the visit to Kyoto in April 2014, but so far I've left out the blockbuster two and three Michelin star spots that I ate in. One of the most enjoyable, and best bang-for-my-yen, meals was lunch at Roan Kikunoi - the two-star kappo sister to the flagship three-star Kikunoi.

Read more »
Posted by Insatiable Eater at 09:50 No comments: