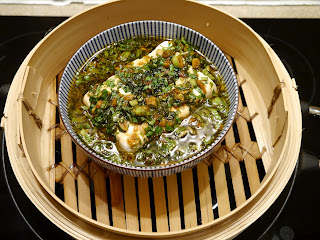 Contrary to popular opinion, I'm not a complete carnivore. Every now and then I like to refresh my system with some simple, non-meaty food. Believe it or not, I've flirted with vegetarianism a few times, lasting three months at one point, but the meat cravings generally get the best of me. After a lot of recent indulging I felt it was time for my favourite dish from one of my most reliable cookbooks, Recipes and Stories by Kylie Kwong. It's vegan and its tofu, but please keep reading! I promise you'll be inspired.

Read more »
Posted by Insatiable Eater at 19:01 No comments:

Last week we checked out the newish 10 Greek Street in Soho. I'm all for restaurants naming themselves after their street address, unless perhaps you're located on Shoot Up Hill a suburb away in Kilburn. Heroin chic is so 90s, right? While a street-named restaurant may reflect a little poorly on the imaginative prowess of the owners, it is instead doing the diner a favour by making the destination all too obvious.  That comes in handy if you have friends like some of mine who lose all sense of direction the minute they step out of a tube station.

Read more »
Posted by Insatiable Eater at 01:49 No comments:

I really like Greek food. Actually, food from that region, be it Greek, Turkish, Lebanese, Syrian all generally interests me. Near Queen's Park where I live in London, there are some great Middle Eastern supermarkets stocking just about everything I need locally. If I can't find it here, I can usually get it from the Edgware Road not too far away. London's cool like that.

It's been a while since we cooked Greek food at home though. We've got a few cook books with a Greek slant that we turn to when the urge strikes. The ever-reliable Tessa Kiros has a dedicated Greek book as well as recipes in several of her other books. Jill Dupleix, a wonderful Australian food writer and fantastic cook, has a few Greek recipes scattered throughout her numerous books too. But for this recipe, we turn to the Bible that is Vefa's Kitchen.

Read more »
Posted by Insatiable Eater at 09:33 No comments:

A French feast at Koffmann's

With so much eating out recently, I thought it was time to dial back on the food expenses a bit. But, as usual, I was thwarted by the latest email from Bookatable with a 3 course meal for £26 at Koffmann's. I'd meant to check out the legendary chef of La Tante Claire fame at his new home at The Berkley hotel after eating what was probably the richest meal of all time when he headed up the Selfridges pop-up restaurant a few years back. That meal, including the gloriously gelatinous trotters, still lives on in my memory, and probably my arteries. Oh and that pistachio soufflé!

Now I'm generally a little wary of the set menu at places like Koffmann's. The menu tends to be a simpler take on a chef's food, but that's not necessarily a bad thing. I've not eaten at Marcus Wareing at The Berkely, for example, but I don't think I'd order his set lunch menu and then regretfully wonder if I were missing out on some of the flashier food combinations of the tasting menu. My point is that Chef Koffmann isn't really about flashy food combinations, but about honest, well constructed, hearty, French brasserie food. For that reason, I thought I'd give the Bookatable offer a go.

Read more »
Posted by Insatiable Eater at 11:25 No comments:

Nathan Outlaw is my food hero and not just because he has the coolest surname I've ever come across. The man has established a true destination for foodies down in Cornwall focusing on carefully selected seafood. His namesake restaurant has gained two Michelin stars in the process and it's been awarded the title of Best Fish Restaurant in the UK by the 2011 Good Food Guide and I couldn't agree more.

So how did we end up in Cornwall for four days you ask? Well, do you ever have those moments when you just need to get out of the big smoke for a bit? I think it's because we last went away in December and have no breaks planned until April when we head to Sicily for a wedding. A short trip away to freshen our moods seemed definitely in order.

Read more »
Posted by Insatiable Eater at 13:58 No comments:

We went back to Copenhagen in early December. This visit was a second attempt to get there in as many years. The first was a snowed-out shambles thanks to the London winter of 2010. Remember when it all shut down? Sigh. But not this time, the skies were clear for take-off! Copenhagen is one of my favourite cities, to wit: the people are friendly, the food is great (yes, you noma...I'm still trying to get a repeat reservation) and the shopping is wallet-emptyingly good. It's not a cheap place to visit by any stretch, but I think you get value for money there. And I can't resist one of the stores which stocks a mind blowing collection of Danish design items along with other fantastic things. I'm talking about the department store Illums Bolighus, of course, and I always make a bee line for it when I get to Copenhagen.