Nathan Outlaw is my food hero and not just because he has the coolest surname I've ever come across. The man has established a true destination for foodies down in Cornwall focusing on carefully selected seafood. His namesake restaurant has gained two Michelin stars in the process and it's been awarded the title of Best Fish Restaurant in the UK by the 2011 Good Food Guide and I couldn't agree more.

So how did we end up in Cornwall for four days you ask? Well, do you ever have those moments when you just need to get out of the big smoke for a bit? I think it's because we last went away in December and have no breaks planned until April when we head to Sicily for a wedding. A short trip away to freshen our moods seemed definitely in order.


We ended up choosing the St Enodoc hotel in Rock, which is where the Restaurant Nathan Outlaw and his more casual Seafood & Grill sit side by side. We didn't specifically go to Rock to eat at the Restaurant N.O. You see, my fine dining levels were already at all time highs after eating at co-two Michelin star holder The Ledbury a few weeks earlier, (check my thoughts here).  The credit card was suffering a bit of fine dining fatigue too. But it seemed a waste to go all that way and not eat at the restaurant given all of its accolades. Plus I was intrigued by an all seafood tasting menu.

And you know what? I'm so glad we took the opportunity to eat this amazing food because we enjoyed a meal that truly exceeded expectations. At £85 for the seven or so courses, it's also pretty reasonably priced. As a reminder, The Ledbury was £105, although to be fair, they were doling out black truffles like they were going out of fashion.

We started with two small dishes. The first was titled Brill Tartare, Fine Herbs and the other was Soused Mackerel, Jerusalem Artichoke. The brill was sublime. It was fresh, creamy, salty and utterly delicious. The mackerel had a gentle saffron flavour balancing the acidity of the jerusalem artichokes. This dish captured the essence of mackerel.

Then came the Lemon Sole and it was a revelation. It was draped over two deep fried oysters which were coated in squid inked-breadcrumbs making them look like little black truffles. Drizzled around the sole was an oyster sauce which was light but rich and delicious along with some lemon oil and diced cucumber. I'm still dreaming about this dish. 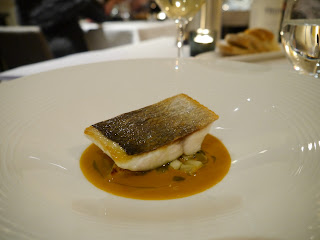 Cod was up next and I remember being a little disappointed with the cod at The Ledbury. But not here. The dish was called Lightly Salted Cod, Mushrooms and Hazelnuts. The fish was coated in a hazelnut and parsley crust and served with delicate gnochi, little button mushroom purée blobs and petals of red onion on a bed of kale. Wow. It looks a treat doesn't it? That's because it was. My co-diner called it the best. cod. ever. It was so good that I told Nathan it was better than The Ledbury's cod dish when we popped into the kitchen after the meal. He seemed chuffed.

A dish called Bream, Crab, Celeriac and Apple came up next. This was another complex dish partly due to the sauce which was based on a rich prawn stock, lightened with tarragon oil. The crunchy celeriac and apple were a great complement to the fish. 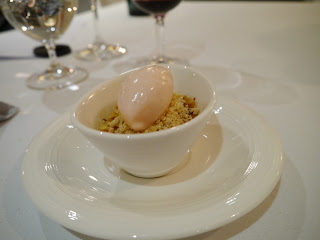 We opted to go with the cheese course which was local, of course, before our two desserts. Dessert 1 was titled Burnt Rhubarb and Custard Cream. This was a great foil to the cheese course and the name of the dish undersells how great it was. It was served with a rhubarb and champagne sorbet making the whole fresh, acidic, crunchy, textural and altogether lovely.

The final course was Treacle Tart, Quince Jam and Yoghurt Orange Sorbet. I would have swapped the dessert order around as I thought the treacle tart was a slightly muted note to finish on. Still, the dish was quite ingeniously constructed with the quince transformed into the little coloured puffs you see on the plate.

I ordered a bottle of Chablis to go with the meal which turned out to be a pretty good choice. I thought charging £75 for the matching tasting wines was a little expensive (especially compared to £50 at The Ledbury) although there were some intriguing options such as a wine from Japan and another from Uruguay. 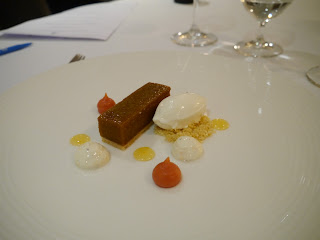 The service was welcoming, professional and very friendly making us feel a bit like family. That sense is echoed in the small scale of the restaurant with room for only 20 lucky diners. 21 at a pinch.

By the way, the hotel was very comfortable too. Our room was decked out in an understated nautical theme with a bay window overlooking the estuary across to Padstow. Given it was a February getaway, the room came at very reasonable low season prices, although it also came with the changeable low season weather. Thankfully, the fire in the lobby was kept well stoked.

I realise I've used a lot of superlatives in this write up, but Nathan Outlaw's restaurant down in Cornwall is a true dining destination and anyone who likes to eat good food should go. If you can't get into the restaurant, I can also recommend the more relaxed Seafood & Grill where the cooking is also of a high standard. We had a great rib-eye cooked to medium rare perfection, a juicy whole lemon sole and a rice pudding with rum soaked raisins of epically alcoholic proportions.

All in all, it was a perfect weekend getaway. Oh that reminds me. I should tell you about a weekend away in Barcelona last year which had lots of low-key highs and a high-key low in the form a one Michelin star place which almost turned me off tasting menus for life.
Labels: Cornwall Great British Menu Michelin star Nathan Outlaw Review Rock St Enodoc hotel The Ledbury