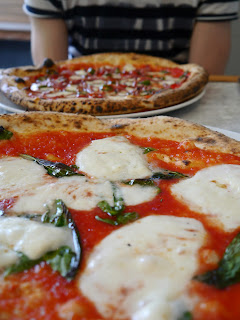 I sometimes wonder how my brain is wired. After eating at the recently opened Sacro Cuore Pizza in Kensal Rise all I could think about was a line from the "Apartment" episode of Seinfeld. Have you ever watched it? It's the one where the gang are at a house party to watch the New York Marathon and George proclaims to be Lord of the Idiots for giving up a lifetime of guilt free sex and tickets to sporting events at Madison Square Garden. Suddenly one of the revellers at the party shouts to the marathoners, "you're all winners!" only for George to reassess his Lordly claim with the line, "but suddenly a new contender has emerged". I guess you had to be there. Anyway, it's the "new contender" phrase that I thought of when I ate at Sacro Cuore. That's because I really enjoyed the also relatively new Neapolitan pizza place Saporitalia on Portobello Road, but I think Sacro Cuore is a step above and probably, just probably, the best pizza you'll get in London.

Sacro Cuore has the pedigree of Santa Maria in Ealing behind it, which is always up there in terms of pizza rankings in London. To my shame, I've never been out to Ealing, partly because I can be one of those people who gets stopped by the invisible barrier at the edge of Zone 2. If I'd known how good the pizza's were, I think I would have made more of an effort. You see, the crust's the thing. It's chewy, charred, elastic and altogether addictive.
I've been steadily working my way through the menu at Sacro Cuore on the three visits I've made and I can say there hasn't been a dud in any of them. Standouts for me include the Diavola with its chilli kick and delicious Neapolitan salami along with the Bufalina which is cheesy, in a good way obviously, with the blobs of mozzarella and parmesan dotting the sweet but tangy tomato sauce. Who am I kidding, the Capricciosa scattered with prosciutto cotto, artichokes and salty olives is a winner too. But then I'd be leaving out the Salsiccia & Friarielli which is a white pizza with no tomato sauce, but dotted with hunks of fennel flavoured sausage and the slightly astringent Neapolitan broccoli. Oh and the calzone is a molten explosion of cheese and meat of epic proportions.
The pizza are enormous too so I'd call Sacro Cuore good value for money with few choices over the £10 mark. We've had a couple desserts, but so far haven't had the appetite for the nutella pizza.The affogato al caffe and the affogato al limoncello are both fine ways to wrap up a meal though.
The place is already buzzing and the queues are building. Service, by mostly young and keen Italians, has always been friendly but a little harried given the popularity of the place.  I only wish that the small covered outdoor section was used for some extra dining space while the summer is still sort of with us instead of a parking lot for prams as it has been on my visits. Kensal Rise seems to be a fertile area for young families.
There is now a great arc of pizza options close to where I live. Saporitalia, Pizza East (Portobello) and, best of all, Sacro Cuore which as fortune would have it is closest. If I had to rank them, I'd pick Sacro Cuore above the other two, but I like the option of pasta at Saporitalia too. This isn’t just a great addition to the neighbourhood dining scene; it’s a great addition to the London dining scene. If your pizza diet has thus far consisted mainly of the Express variety, do yourself a favour and try the real thing, you won’t be disappointed. This is pizza you should cross town for.