Neptune Oyster - the God's are smiling 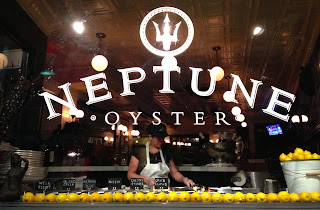 Neptune Oyster in Boston's North End is terrific. It's small and cramped, it doesn't take reservations and there's no dessert and no coffee. You might wait more than an hour for a spot at the bar or have to share a table with strangers, but you will forget all of that when you slurp your first briny oyster or bite into a chunky lobster roll. I recently took two work colleagues to Neptune Oyster before a flight back to London. I can't think of a better pre-flight meal and it sure beats the hell out of BA plane food.

We started with a selection of oysters, whittling down the dozen varieties stocked to a choice of four. We randomly chose (clockwise from the lemon wedges in the photo) Katama Bay, Fire River, Bagaduce and Blue Pool ($2.90 each) which came from areas such as Massachusetts, Maine and up into the nearby cold waters of Canada. The helpful ordering form lists descriptions like "buttered popcorn finish" (Katama Bay) and "cream cucumber finish" (Blue Pool), which were all news to me. Clearly all oysters are not created equal. Starting with the milder flavours, we ended with the delicious Blue Pool from British Columbia which were definitely richer in flavour but I'm not sure I got the cucumber finish. The oysters tasted so fresh and were expertly shucked without a hint of grit or shell in any mouthful. The oysters were served with a slightly spicy Cocktail sauce and a simple Mignonette (chopped shallots and vinegar) but were best on their own with a squirt of lemon.
For my main course, I ordered the Seared George Bank Scallops, d'anjou pear butter, Long Island duck confit, Brussels sprouts and Maytag Blue ($33) mainly because it combines two of my loves: scallops and confit. To be honest, the particularly sharp crumbled blue cheese overwhelmed the other flavours but were easily pushed to the side to eat solo at the end. The scallops had the perfect almost-translucent, just-cooked colour to them while the textural mouthful of sweet seafood and earthy slow-cooked duck was blissful.
Other dishes that were ordered, but that I didn't get to try, were a plate-stretching Greek Bronzino (a Mediterranean seabass) served on a bed of sautéed mushrooms and a cauliflower purée for $29. The salt cod-based Baccala salad ($15), whipped with yukon golds and served with roasted tomato and a crostini smeared with a herby paste was devoured as happily as the fish. The lobster roll ($25) also made an appearance with its fat chunks of butter-annointed meat dwarfing the roll. It wasn't pretty, but, who cares, it was tasty. If you're a Londoner and more used to Burger & Lobster, you'll probably never order their meagre portion again.
We drank an excellent crisp Vaillon Premier Cru Chablis ($78 - a 2010 vintage I think) which had the perfect amount of acidity to go with the seafood. The wine list is extensive spanning the globe and various price points so you're bound to find something you like. Service was also friendly and efficient in the small space.
There's an extensive raw bar (crab claws, clams, mussels and more), and lots of inventive starters and main courses. Influences in the cooking techniques range from European to Asian but from the two visits I've had, the kitchen uses the techniques to showcase the produce rather than as something gimmicky. It might not be exactly cheap (there are less expensive lobbie rolls elsewhere in Boston, for example, with those at the pretty reliable Legal Seafood coming in at around $20) but with the obvious quality and freshness of the food I'd be hard pressed to recommend anywhere else for a feast in Boston. Oh and don't let the potential queue put you off. We were seated right away at around 6pm on a Thursday night when Boston was buzzing ahead of Bruins game because our entire party were present. Apologies to the table of four who were there before us, but you can blame your tardy fourth for your wait.