The Sportsman, Kent - Just do it

The Sportsman is one of those seemingly mythic restaurants existing beyond Zone 2 that always seemed unreachable to this non-car owning city slicker. Yes I know there are trains but really, who would entrust their punctuality, or anything else for that matter, to SouthEastern Trains? The four hour lunchtime tasting menu at The Sportsman kicks off at midday and I'd prefer not to have to leave home at 6am to reach Whitstable in time thanks very much. So we bit the bullet, hired a car, organised a shady mid-week hookie day from work, et voila, found ourselves in Kent on a frosty mid December day. For some reason, I had thought the focus of the meal would be solely on seafood given the proximity to the coast, but I was wrong. The seafood courses were my favourites, but vegetable-only and meat-based dishes held their own. There was very little to fault in the meal and with the relaxed and friendly service, I'd even brave SouthEastern to get another taste of the terrific brill braised in vin jaune sauce.

The meal starts with a number of snacks. I liked the pickled herring on soda bread with a lovely jelly the most with the cheese and lamb kidney bite a close second.
The second snack was a magnificent poached egg yolk bathed in a horseradish cream with smoked eel and a parsley sauce. It was like a warm hug and a smack in the mouth at the same time. Lightly smokey and very creamy, but with freshness from the parsley and a kick from horseradish.  A lot of raw dairy products are used at The Sportsman, giving the dishes a wonderful bracing tartness too. The 2.5 hour drive from west London is quickly forgotten with each mouthful.
If it were possible to lick an eggshell clean I would have, but I don't have the most dexterous tongue.
Since you're a stone's throw from Whitstable, oysters make an appearance. The native is served with chorizo (in the middle of the pic below), while two rock oysters complete the trio but in different preparations. One is ever so gently poached, slathered in a buerre blanc and topped with caviar, and another comes with a Bramley apple granita.
A terrific vegetal interlude followed. The pot roasted red cabbage had a great ntensity of flavour which was emphasised by an apple balsamic. Some stewed apple amplified the tart and sweet notes of the dish.
Arguably The Sportsman's signature dish is a slip sole slathered in an umami rich seaweed butter, but I wasn't exactly bowled over by it. Perhaps that's the thing with expectations, you're bound to be somewhat disappointed that the Insta-hype doesn't match reality. I found the texture of the fish a little too dense and just a touch dry. 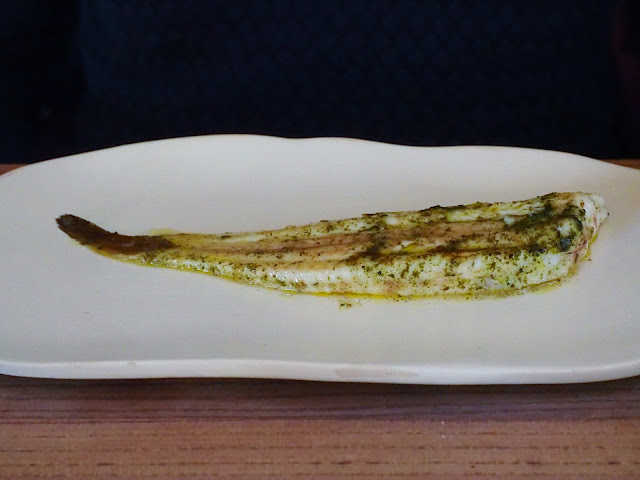 The rich slice of mallard breast changed the pace of the meal up a gear. A richly delicious bread sauce matched it, but was tamed a little by a rosehip sauce drizzle.
My favourite dish of the meal was the braised brill in a vin jaune sauce with smoked pork. This sauce was, quite simply, sensational. The fish was flaky and tender, the fatty pork was gently smoked and added a different texture to the dish and nestled underneath the fish were some stewed leeks for sweetness. This dish is all about the sauce though, and you'll want to lick the plate clean.
Dairy cows are having their moment aren't they? Take your pick of the current crop of hipster hangouts like Kitty Fisher's or the Chiltern Firehouse which are ripping off the Etxebarri classic trying to serve the oldest moo in London. So I was slightly surprised to see it on the menu in deepest Kent. This was described as a retired dairy cow and was served with a solidly-made mash and a blob of tarragon sauce. It's a rich flavour, slightly chewy too, and the fat has a butteriness that isn't really pleasant from the get go. I loved the Etxebarri chop, but the few slices served here were definitely enough.
This was the third relatively rich dish in a row, so dessert was a more than welcome change of pace. The whimsical pear popsicle coated in gingerbread crumbs was a perfect palate cleanser.
The meal finished with a Bramley apple souffle and a slightly too-salty-for-me salted caramel ice cream. The souffle wasn't the lightest or airiest I've ever eaten but it had a great acidity to it, like a digestive after the long meal.
The whole experience at The Sportsman is relaxed, informal and great value with the tasting menu a very reasonable £65. The wine list is also very approachable with what seemed to be very modest mark ups. The most expensive red is a Rioja at £80. The only drawback of such an enjoyable day out is that if you're a day-tripper you have to fight the peak hour traffic back to London or, worse, put your faith in that train company. Talk about returning to reality with a thud.