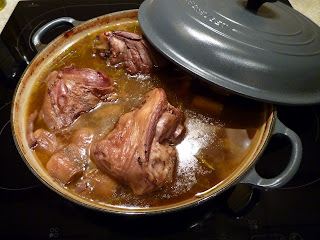 I'm a big fan of the lamb shank and also of Christine Manfield, so putting the two together is a dream date. If you don't know Christine I suggest you grab one of her cookbooks or book yourself a flight to Sydney to eat in her most recent venture Universal. My love affair with Christine goes back a while now. I celebrated getting a new job in Sydney back in 1999 by dining at Paramount, her then ground-breaking restaurant in Potts Point. I still remember eating the duck pithivier and the multi layered rainbow flag ice-cream dessert she created for Sydney Mardi Gras one year. Christine was also kind enough to sign her fantastic book on desserts, which I bought for Mr B's birthday one year. Her mandarin sauce is also legendary at my family Christmas. I think you get the picture. I quite like Christine.

My go-to recipe for lamb shanks usually comes from Nigel Slater's Real Food. This book was a revelation to me when I first lived in London in 1997. It totally opened my eyes to cooking. The photo of the leg of lamb roasting directly on the oven shelf looked so delicious, and frankly edible, I was hooked. In Real Food, Nigel has a recipe for Moroccan lamb shanks cooked with aubergines, onions and harissa. It's a delicious slop that only improves with a few days ageing in the fridge. That's if you have a bit of will power. I feel like I've done that recipe to death, however, and flicking through Stir, Christine's book that accompanies her spice and condiment range, I found my new favourite method for lamb shanks.

The book is broken up into chapters based around a central paste or condiment for which the base recipe is provided. I've cooked lots out of Stir but I have no idea why I haven't tried this recipe before which comes from the harissa section. I'm quite happy to buy harissa from the local shops in Queen's Park but I've made my own from a Moro recipe before too and it's not that difficult. Christine's recipe also looks pretty straight forward. This time though, I use the lovely paste made by Le Phare du Cap Bon, which you can get pretty much everywhere.

For this recipe I got my shanks from my favourite butcher, the Chef and Butcher, at the Natural Kitchen in Marylebone. I order my Christmas goose from them and their salt marsh lamb is fantastic. The queues are shorter than those at The Ginger Pig down the street too. My shanks were cut straight from the hind legs of the lamb and were beautifully Frenched, leaving gorgeous fat little nuggets of meat perfect for my slow cook recipe.

Now many of Christine's recipes can be a little involved, but I've found that all the elements are there for a reason. The mandarin sauce, for example, takes three days to make and has almost a million ingredients, but is worth every minute of preparation. Even my brother, one of my greatest critics, congratulated me on the sauce the first time he slurped it. 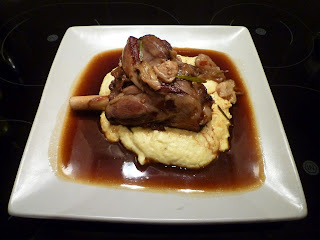 This recipe though is not one of Christine's more time intensive ones. In fact, it's really straight forward. She calls for eight lamb shanks, but I did this recipe with four because that's all I could fit in my Le Creuset. Plus there's only two of us and we're not that greedy. Christine serves the shanks on a wet polenta, so keep the timing of that in mind when you cook these delicious hinds. You could also successfully serve it with mashed potato.

Start by browning the shanks well on all sides in some olive oil. It should take about 10 minutes. Remove them to a plate once browned and throw eight spring onion bulbs (the white part of salad onions in the UK), eight peeled cloves of garlic and two sliced birds eye chillies into the same pan and fry for a few minutes. Add 200ml of red wine to the pan and simmer for five minutes before adding 1.2 litres of stock. Christine suggests beef, veal or chicken stock. I used Heston's beef stock from Waitrose, because we didn't have any chicken stock at home. Return your browned shanks to the pan along with two sprigs of rosemary and one bay leaf.  Bring the liquid to the boil, cover the pan, and then pop it in a 160 degree Celsius oven for two hours.

Have a look at your shanks after an hour or so and maybe turn them over in the liquid, so all of the meat gets a dunk in the flavoursome stock. While two hours is the suggested cooking time, it may vary given the size of your shanks, so don't be afraid to leave them in there a bit longer. When they are tender, remove them from the pan with the onions and garlic and keep warm. Simmer the remaining fluid until it is reduced by half which will intensify the delicious broth. This is where you benefit from having a decent stock too, so don't skimp and use cubes or it is likely to be too salty. Strain the liquid and stir in four teaspoons of harissa to start with until it is dissolved. Now taste! Is there enough chilli? Are the flavours balanced? There should be a delicious lingering lick of heat on your palate. Add more harissa if you like it with a bit more kick.

To serve, place the shanks on some wet polenta with the garlic and the onion and drizzle the spicy broth around and over. Like I said, you could also use your favourite mashed potato recipe here. I went the polenta route and it was lovely. Have some more harissa on hand to satisfy those who want a bit more oomph. See how simple that is? Really, the end result is amazing and I don't think I'll be going back to Nigel's recipe for a while.

All this talk of Christine reminds me that I should tell you about one of my greatest regrets. I saw her on the dance floor of some dingy nightclub in Sydney shortly after the triumph of the mandarin sauce but I didn't have the courage to shimmy over and tell her how great her recipe made Christmas that year. My clubbing days are pretty much over, but I hope to bump into her again one day and finally blurt it out.
Labels: Christine Manfield cookbook harissa lamb shanks Review Stir