Striking it lucky at Gold Mine, Bayswater 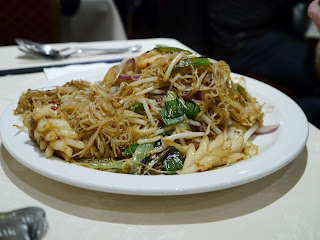 Do you ever get the noodle munchies? Join the club. If I'm in the mood for some Chinese and I'm not near Chinatown, I usually head over to Queensway which is closer to home. This strip has an unusually high selection of tourist trap restaurants but if you look hard enough you'll find a pretty good selection of decent Chinese places to eat too. There is of course, a branch of Royal China here which is an always reliable, if popular, dim sum spot. I've tried a couple other places on the strip (there used to be a good Malaysian there until it seemed to run out of cash to pay the rent) but I now tend to gravitate towards either the Gold Mine or The Magic Wok.

The latter reminds me of a typical Australian Chinese restaurant, the kind which we used to go to when I was a kid in Sydney. I once ordered the classic 'Chinese' dessert of fried ice cream and fried bananas at the Magic Wok. To hell with authenticity, these were absolutely delicious with a scoop of cold vanilla ice cream. But the Gold Mine tends to win me over with its good soups, its lovely smokey noodle dishes and its home made chilli oil with its amazingly deep, rich and complex flavours. 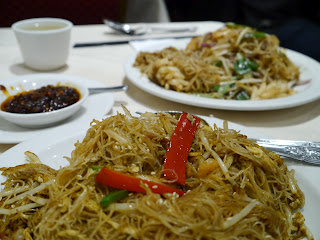 On a recent visit to the Gold Mine, Mr B and I were hankering for some noodles, but we were almost thwarted by a seemingly full restaurant. It seems the word had got out and a tour bus of some sort had filled the place to bursting point. We were squeezed in on the last table, sitting cheek by jowl with our foreign neighbours who were tucking into steamed lobsters and stir fried crabs. Although tempted, we came for noodles. I'm pretty easy to please on that front and knew exactly what I wanted so ordered a spicy Singapore Noodles. Mr B went off menu, as usual, and created a dish of vermicelli noodles with mixed seafood, along with a bowl of the house chilli sauce.

The Gold Mine's Singapore Noodles hits the holy trinity of flavours of this classic-but-easy-to-screw-up dish - the deep smokey notes imparted by a well seasoned wok, a good deal of heat from the chilli and curry and the great textures of the noodles and veg. Mr B's noodles came with a generous mixture of prawns and squid and benefited from a dousing in the house chilli sauce. I've yet to get the recipe for this sauce, but one of these days I will. It's almost XO in quality.

On other visits to the Gold Mine, I've also eaten the house special soup, which is a surprisingly delicious mix of meat parts, offal and otherwise.  A simpler noodle soup with roast duck was also great. Both soups are based on the house stock, a rich broth that sets it apart from other Chinese places on Queensway.

I can definitely recommend the Gold Mine for some good Chinese food if you are in the neighbourhood. If my endorsement doesn't swing it, one of our noodle soup visits was enjoyed sitting next to Sydney-based cafe owner, TV personality, and cookbook author Bill Granger and his family. It's telling that Bill preferred to eat in a cheap Chinese up the road rather than his newly opened London cafe isn't it? Unripe bananas and avocados have been served on more than one visit at his flaccid attempt to recreate the Sydney cafe scene. Oddly enough, we had planned to bake Bill's coconut bread on the afternoon of that very lunch. It turned out better than the one you could order at his new gaff. Weird, huh?